Founded in 1955, Crest is now one of the most recognizable brands in the world. Although it was founded as an American company, many people wonder if the company still makes its products in the United States. 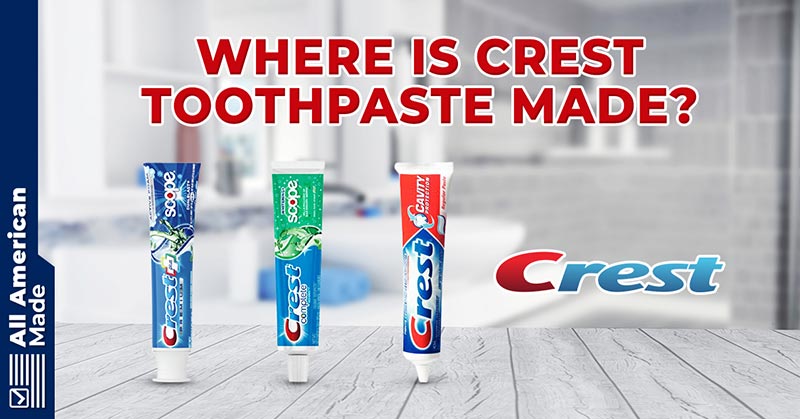 In the rest of this article, we’ll share exactly where Crest toothpaste is made and some other important information about the company.

Crest manufactures most of its toothpaste in Greensboro, North Carolina, but they also manufacture at Proctor & Gamble’s Naucalpan plant, located to the northwest of Mexico City. Greensboro serves as the main location where they make toothpaste.

If you pick up a box of crest toothpaste at the store, it won’t always be clearly marked that it’s “made in the USA” even if it is, which is surprising because most companies like to show off that they make their products in America. For example, take a look at the box of crest toothpaste below. The manufacturing location isn’t clearly marked. I was a little surprised, so I reached out to Crest, and they did inform me that most of their toothpaste is, in fact, made in the USA. 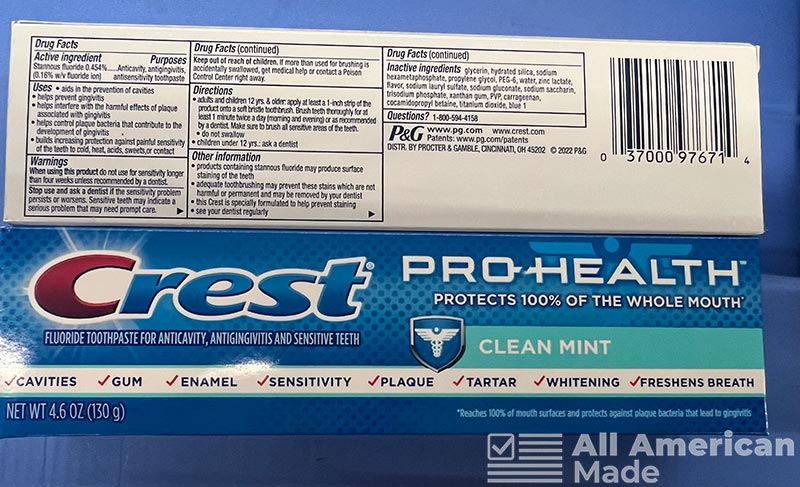 If you’d like to learn more about Crest’s manufacturing practices, keep reading as we further explore where Crest makes its toothpaste and its relationship with Proctor & Gamble. 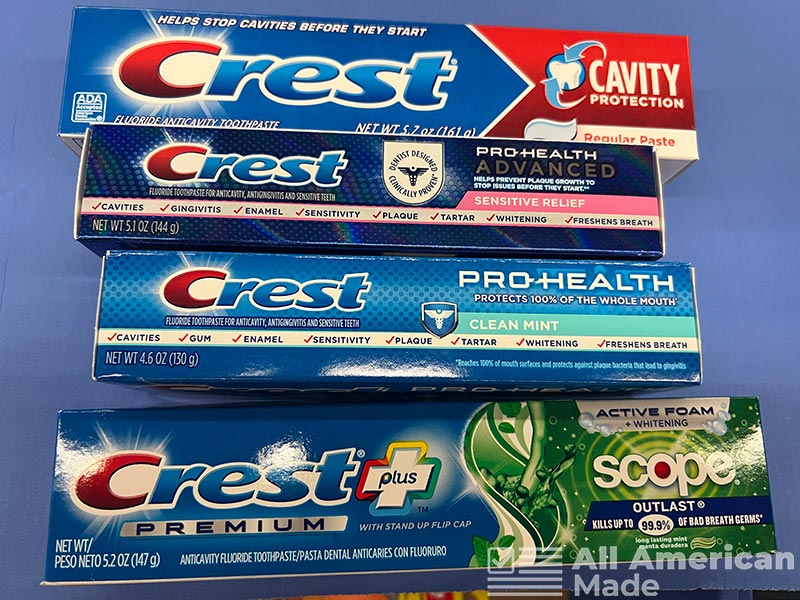 By and large, Crest manufactures most of its toothpaste at its plant in Greensboro. However, they do manufacture some of the toothpaste in Naucalpan, Mexico. To be more specific, Kid’s Crest Cavity Prevention is manufactured in Mexico. For anyone concerned, check the packaging ahead of time to see that it says, “Made in the USA.” Aside from toothpaste, Mexico manufactures other Crest products.

Funnily enough, some of the components may originate in the United States, and Mexico assembles them. In some cases, you may see “Assembled in Mexico” on the package labeling. People of the United States have sometimes complained about “Assembled in the USA” happening here, but it happens all over the world due to globalization.

Some of the products manufactured in Mexico go to the local markets in Mexico and into South America, but P&G also ships some of its products north to the USA.

Colgate manufactures some of its toothpaste in Mexico as well. In fact, their manufacturing plant in San Jose Iturbide, Guanajuato, is the largest toothpaste factory in the world. 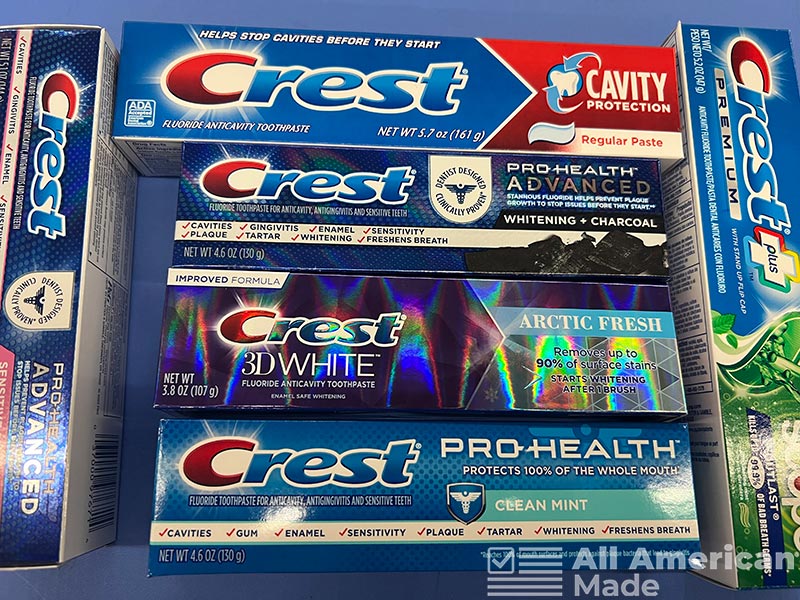 Not only does Crest manufacture in the United States, but they continue to invest there. That highlights an important distinction because some American-made companies quietly and slowly send manufacturing jobs overseas.

Proctor & Gamble, on the other hand, invested $8.9 million in the expansion of the warehouse outside of Greensboro in 2017. The company added 22,000 square feet to its facility. Ultimately, the additional space will store and access the products with greater ease after coming out of the factory.

For anyone concerned, Crest manufactures all of its products in the USA, Canada, and Mexico. They do not manufacture toothpaste in China for the market in the USA, but they operate factories there for the local markets.

During the move, 230 jobs in Puerto Rico were lost.

Crest Manufactured in Other Countries Has a Different Name?

In some of the other countries, they will release the Crest brand under the label Blend-A-Med. The countries where this happens include:

What Crest Products are Not Made in the United States?

Outside of that product line coming from Mexico and Canada, you should know about others. For example, 6.2 oz Crest Plus Scope Minty Fresh Striped Toothpaste and the Neat Squeeze Tubes come from P&G’s manufacturing facility in Naucalpan, Mexico. Whenever Crest makes its products outside the United States, they will specifically say that on the packaging.

Crest offers a total of eight toothpaste product lines that include:

In total, Crest offers around 20 products that include its toothpaste, mouthwash, dental floss, Crest Whitestrips, and tooth whitening products.

Why You Won’t See American-Made Crest Products in Great Britain?

So is Crest Toothpaste Made in the USA?

We would answer that question with a resounding, “Yes!” You can buy American-made toothpaste from Crest easily. You may want to watch that you don’t buy toothpaste made in Mexico, but it doesn’t pose a big problem. Most of the Crest toothpaste in the USA comes from Greensboro.

You do have a danger that we would like to highlight in the next section. Crest falls under the parent company Proctor & Gamble. P&G remains a largely American-made company with 17 factories around the world and over 12 of them in the USA. Over 70 percent of P&G factories sit on American soil. Admittedly, this fails to show the size of the factories, but we think it safe to assume that most of the manufacturing jobs originate in the United States.

Labels that are made in South Africa or made in China are counterfeit products. You have other subtle things to look for, like saying “Defence” on the packaging instead of “Defense” or “Flavour” instead of “Flavor.” This shows you the UK spelling of the product, which South Africa and China have been known to use. It also reveals it as a counterfeit.

Don’t brush your teeth with counterfeit Crest because it may pose a health risk due to it containing trace amounts of poisonous chemicals.

Colgate vs. Crest: Which is More American Made?

Colgate and Crest produce many of their toothpaste products in the United States, but we would like to compare the two to see which one performs better. We learned how Proctor & Gamble produced less in Mexico than Colgate, according to Statista.

Based on the information given, Proctor & Gamble’s oral care products accounted for 18.6 percent of its total production. On the other hand, Colgate’s production of oral products in Mexico accounted for 59.2 percent of its total. We think this statistic makes sense when you look at how Colgate has the world’s largest toothpaste factory in San Jose Iturbide, Guanajuato, Mexico.

Using this information, we would award Crest with the honor of being the more American-made toothpaste. While some of their products come from Mexico, you can find plenty of products made in the United States. For those unhappy with Crest manufacturing elsewhere, you may want to look at some of the other American-made toothpaste that we mentioned above. They remain some awesome alternatives that deserve your attention.

If you’re interested, you can also check out our full article on where Colgate toothpaste is made here.

Is Crest Better Than Colgate?

During a three-month clinical study, researchers confirmed that Crest was superior to Colgate in areas like reducing gum bleeding and promoting gum health and wellness. During the study, researchers learned how Crest users had 50 percent less gum bleeding than those who used Colgate Total. Not only is Crest more American-made, but this study showed how it had a better performance than its competitor. Both brands remain two of the largest oral care brands in the world.

What Other Toothpaste Brands are American Made?

While we believe that Crest has done a phenomenal job at being American-made, we would like to take the time to highlight some of the other great American-made toothpaste brands.

Some of the American-made toothpaste brands include:

You can’t go wrong with one of the toothpaste brands above. Like with Crest toothpaste, however, we would advise research on each of the brands to ensure that all of their products were manufactured in the United States. Some of them may be like Crest in that a couple of their products come from a foreign source.

On the whole, Crest does a great job at remaining American-made. Its parent company is a good American-made brand, which reflects in this subsidiary. Someone on the search for a wholly American made toothpaste brand may want to look at the choices listed above, but for a large corporation, over 70 percent of P&G’s factories situate themselves in the United States.

That bears well for American manufacturing, and anyone who supports Crest will be supporting American jobs. Crest has a history in the United States that stretches back to over half a century, and they continue to support America to this day, making them worthy of your support. If you have any further questions about where Crest toothpaste is made, just let us know in the comments.

2 thoughts on “Where is Crest Toothpaste Made? 2023 Overview”