Igloo is without a doubt one of the largest cooler manufacturers in the world. The company has a rich American history, but with so much success, many people wonder where Igloo coolers are made nowadays. 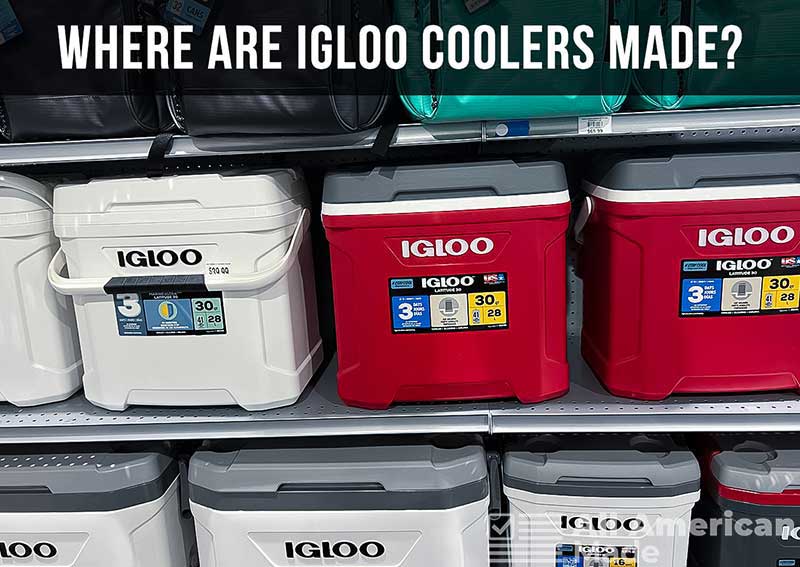 In the rest of this article, we’ll share exactly where their coolers are made and other important information about the company.

Many Igloo coolers are made in the USA. However, many are made in other countries, including China, where the cost of manufacturing is low.

Which Igloo Coolers Are Made In The USA? 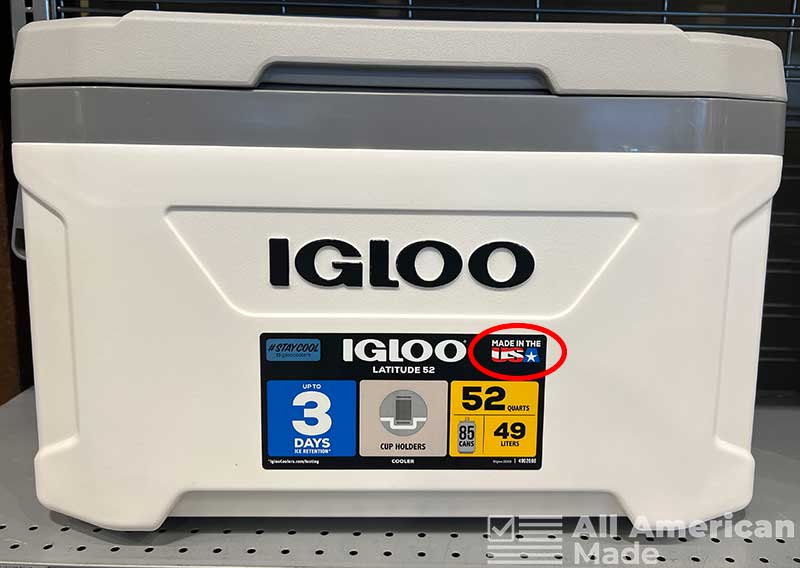 The easiest way to determine which Igloo coolers are American-made is by referring to the Made in America page on the Igloo website. There you can easily see which models they offer that are currently made in the USA.

Igloo is proud of its facilities in Texas, and some of the cooler lines that are American-made include:

Unfortunately, with 500 or so products made from Igloo, 60 or 70 American-made products isn’t great. Hopefully, they will continue to bring more products back from China where the majority of their products are made. One way to let them know that we as consumers want more domestically made products is to search for the Made in USA product label.

Like most American-born companies, Igloo started manufacturing in Houston, Texas but eventually started sending them overseas. The good thing is that Igloo has recently brought many of its manufacturing jobs back to the US. There are also many other brands that also offer American-made coolers.

The Igloo company says they are looking at ways to get as many Igloo coolers made right here in America as possible. Right now, most of their hard coolers are made in Texas, with some smaller parts such as latches, hinges, and spigots made and shipped from overseas. Most of their soft coolers—fabric material coolers that are stitched together—are still being made in China.

In the 1980s and 1990s, many American manufacturers started eyeing and sending jobs to China and other countries in order to save money on manufacturing. Igloo was no different, though they still kept their manufacturing facilities in Texas.

As 2013 rolled around, Igloo had upgraded its Texas manufacturing facility, added more machines, and brought back more than 280 American jobs by the end of that year.

A private equity group took over Igloo in 2008, and as a result, the company saw years of record sales. Igloo then took those profits and upgraded its facilities. They bought more plastic forming machines, including a $2 million rotational-molding machine that produces much thicker plastic products. With this new machine, Igloo brought their high-end Yukon line of products to the United States.

The Yukon coolers are Igloo’s answer to expensive, luxury items, Yeti coolers. This line was previously made exclusively in China, but after 2013 they have been manufactured in-house.

During this new expansion back to the United States, Igloo added over 280 full-time jobs. Previously they had temporary workers come in when demand was high, then they would end the working contracts once Igloo had met the demand for new coolers. Now they are able to keep production running full-time in their Texas facility and keep over 1200 American workers busy with permanent jobs.

Along with adding jobs, the Igloo company increased the size of its manufacturing plant and added a new distribution center in Katy, Texas—a city located within the Houston metropolitan area. With the expansion, Igloo now owns three buildings out there, including their corporate headquarters, which was recently consolidated. The combined space and expansion equals over 150 acres or 1.8 million square feet.

When they increased their production and brought these jobs back to America, Igloo didn’t celebrate with a typical ribbon-cutting ceremony. They initiated a flag-raising ceremony instead, complete with a Veterans Honor Guard to kick off the new changes.

Igloo is once again at the top of the cooler market and making 18 million coolers a year. The majority of those coolers are, in fact, made here in the United States. Since the change only happened a few years ago, you may still see old inventory with Made in China labels. Current CEO and Chairman Gary Kiedaisch says the company is looking for ways to bring the manufacture of these coolers back to America. Hopefully, we will begin to see all Igloo products made here in America.

Where Else Does Igloo Manufacture Its Coolers?

While Igloo used to make coolers exclusively in the United States, not all of their coolers are still made in the US. I actually decided to go to a local sporting goods store near where I live that carries Igloo coolers to see for myself where some of the coolers being offered there were made. Below, I’ll share some of the tags and labels that were on the coolers so you can see for yourself.

The first cooler I checked out was made and China. I was a little disappointed by this. 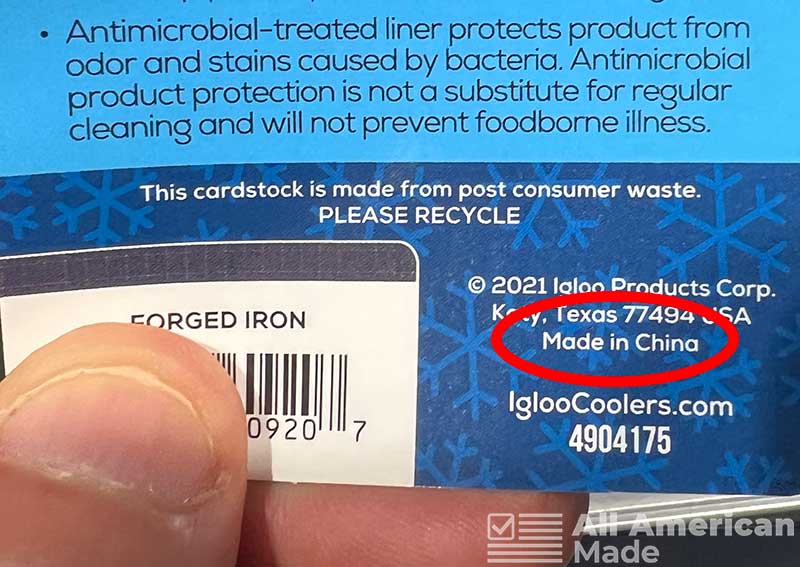 The second cooler I inspected was made in Cambodia. 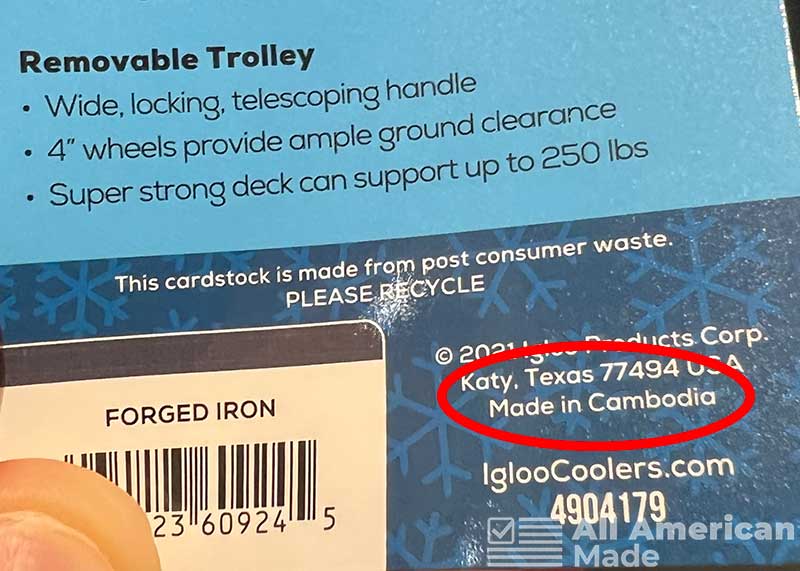 The third cooler I inspected was made in the USA, and I was happy to find that the far majority of coolers being offered there were, in fact, made in the USA. 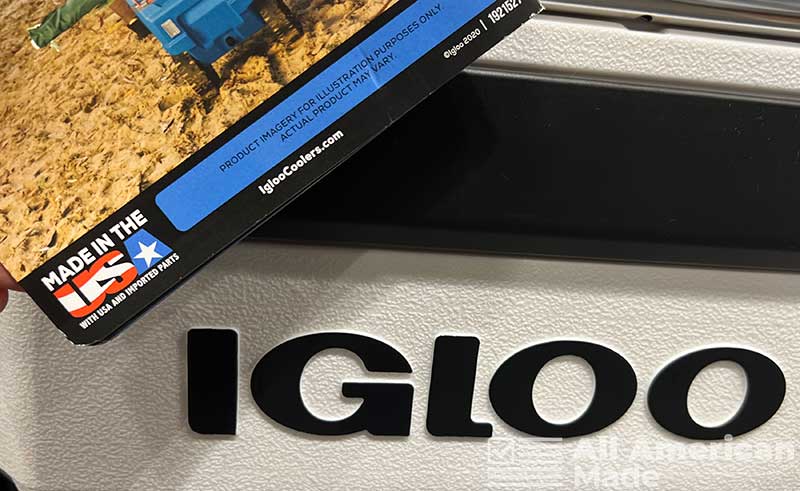 The only thing that’s a little disappointing is that even the coolers that are American-made are built with some imported materials. The exact amount of imported parts is unknown, but being that they mention it means that it’s more than a negligible amount. This is someone they have to do legally because of rules established by the FTC. If you’d like to learn more about this, you can check out our guide on what made in the USA actually means.

By far, the majority of the coolers being offered there were made in the USA. Here are some pictures of other coolers that were in the store. 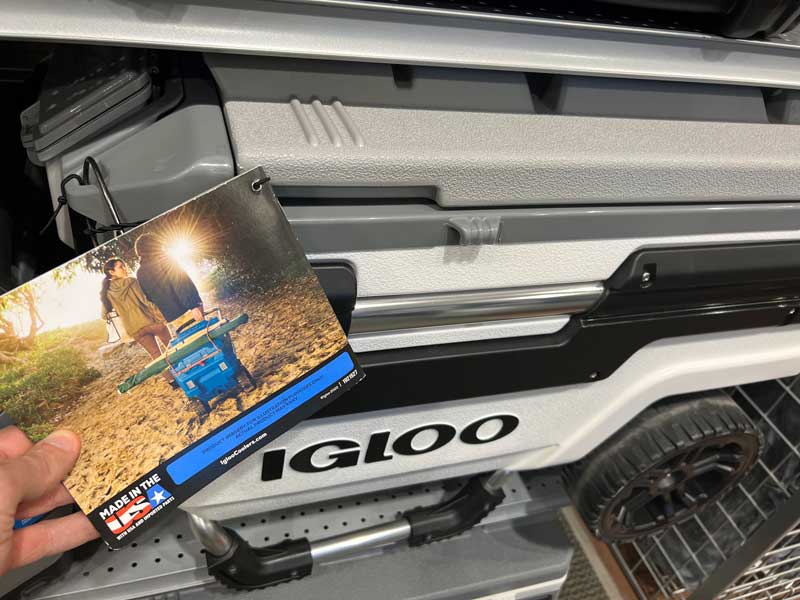 The made in the USA symbol is easily recognizable, so be sure to check for it if you’re looking to pick up an Igloo cooler. The coolers that are made in China are also clearly marked. 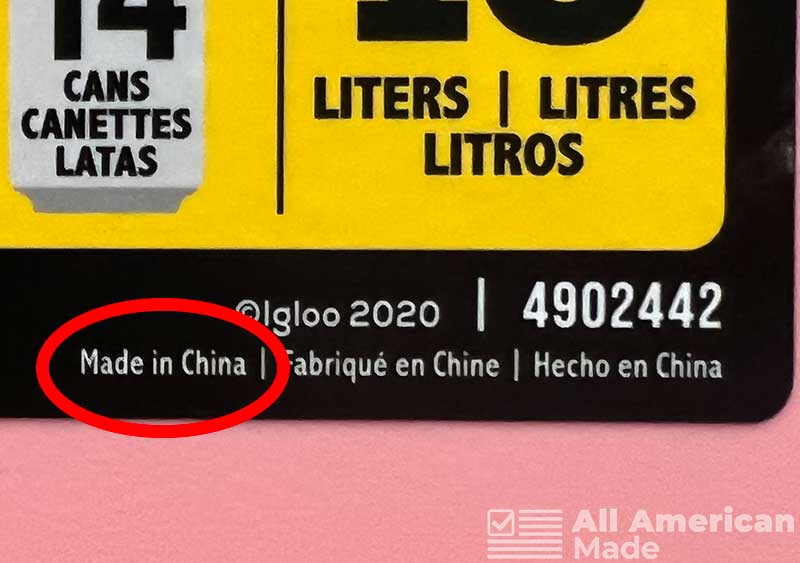 If you can’t find a sticker, many of the coolers also have the country of origin molded on the cooler. 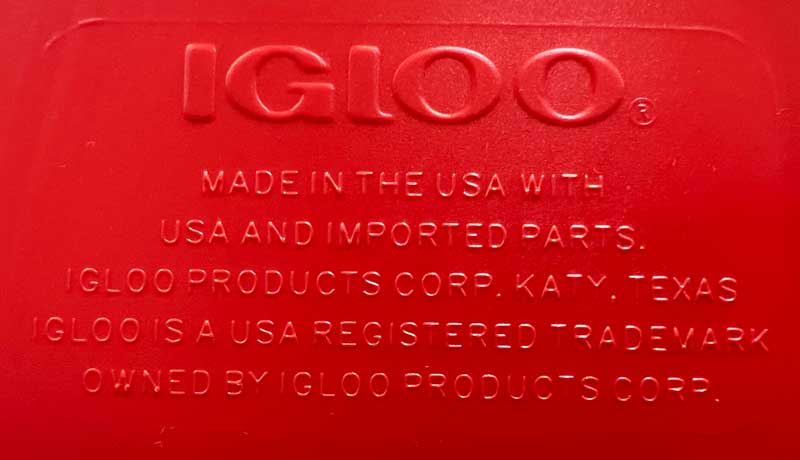 Where to Find American-Made Igloo Coolers

There are many stores that offer American-made Igloo coolers. One of the easiest places is surprisingly Walmart. Once upon a time, Walmart meant American-made products, but as the company experienced unprecedented growth, that mantra began to fall behind. Now most products from the retail giant are made anywhere but in the United States.

In April of 2022, though, Igloo partnered with Walmart to start selling American-made coolers in the giant’s stores across the nation. Igloo’s brand of Overland coolers, which is one of the products made exclusively in the United States, will be sold in Walmart stores only.

You can also find Igloo coolers that are American-made in many sporting goods stores and online, but just remember to double-check that the model you’re looking at isn’t made overseas.

From its humble, early beginnings, Igloo has been through several different owners. After starting with TTI in 1960, the company was bought decades later by Brunswick, who owned it until 2001.

From there, the private investment group Westar Capital bought Igloo. During their ownership—in 2004—they moved Igloo’s corporate headquarters in Houston and manufacturing facilities in Spring Branch and Waller County to the current location of Katy, Texas. Westar Capital then turned around and sold Igloo to J.H. Whitney in 2008.

It was under J.H. Whitney’s reign that Igloo saw record profits and was able to reinvest in American manufacturing. This exceptional profit helped to bring many of their previously overseas manufactured products back to the states.

Only seven years later, Igloo was bought again by another company. ACON investments, a private equity firm located out of Washington D.C., was now the majority owner, while J.H. Whitney still held a small portion of the company.

Recently, in September of 2001, Igloo was again bought by another company. This time the Igloo banner flew under the Dometic Group, a Swedish company. The Dometic Group sells luxury products related to the outdoors, marine applications, food and beverage, and climate control applications. With 92% of Igloos sales coming from America, Dometic Group hints at wanting to expand sales across the globe. 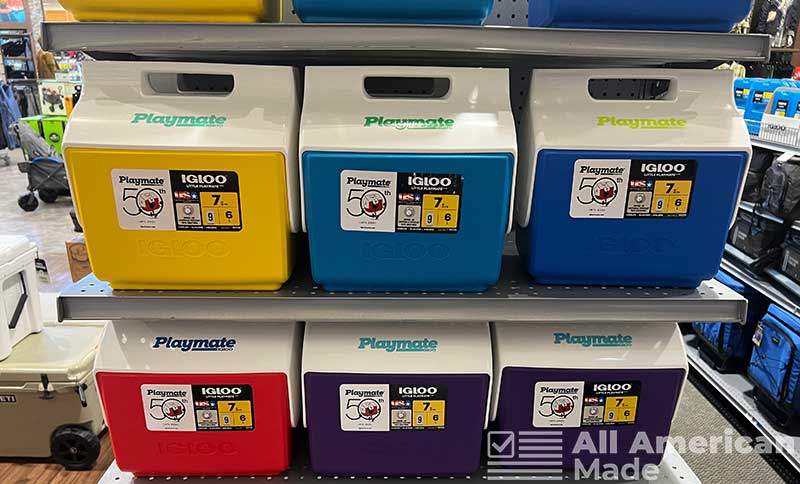 Igloo coolers have been best-selling products for decades, and many owners still have coolers they purchased many years ago. I’ve even used coolers passed on from parents and grandparents, which still worked great.

Several, though not all, of Igloo’s hard case coolers, are still made in America, and many more are coming to retailers near you as they continue to expand their domestic manufacturing. When you are looking for an Igloo cooler made domestically, search for the Made in USA label, it should be prominent on the tag or even branded into the cooler. When shopping at Igloo’s online store, click this link here to find American-made products.