Penn fishing reels are some of the most popular and trusted reels on the market. Otto Henze, an immigrant from Germany, founded the company in 1932, about ten years after migrating to the United States. With its deep American heritage that spans nearly 100 years, one might wonder if the company continues to make its reels in the United States since many fishing reel companies have taken to manufacturing elsewhere. 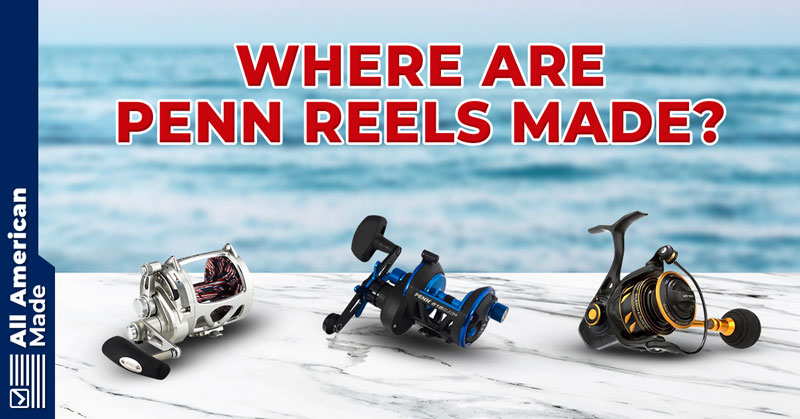 In the rest of this article, we’ll share exactly where Penn reels are made and other important information about the company.

Penn reels are primarily made in the United States and China. While the brand started in the United States, they don’t make as many fishing reels here as they did in the past. Always check the box or product listing to determine where a specific model is made.

If you’d like to learn more about Penn Reels and where they manufacture their products, keep reading as we take a deep dive into where they make their reels, along with a lot of interesting facts about the Penn Fishing brand.

The factory in North Philadelphia is situated behind a pizza place in an old brick building on West Hunting Park Ave. They employ over 300 workers, and this involves all aspects of the business, from design and machining to assembly.

To give you an idea of what kind of problems they faced by keeping all of their manufacturing in the United States, Brent Kane, the national sales manager, explained why they had to produce the Penn SSG Spinning Reels overseas. It gives you a picture of why other companies may do the same. He explained that the business climate forced them to make them elsewhere. It became a decision where they had three choices:

When you’re a business, you have to adapt to survive, or you won’t make it. We always harp on companies for producing their products in countries like China, but if we don’t support American-made products in a big way, we can only blame ourselves.

Brent went on to explain that his doubts about having the products made overseas were put to rest when Penn could exercise some level of oversight on the quality. If the quality was poor, he said that he wouldn’t even hesitate to send back the entire shipping container.

If you ever buy a poor Penn reel, you may be covered under their warranty. This page also shows you how they still keep their main factory in Philadelphia, and it shows you some of the places where you can return a Penn reel if it wasn’t up to the right standards.

Along with manufacturing the reels at their factory, they also produce rods, combos, and fishing-related products.

Sycamore Partners operates as a private equity firm in New York City, and they manage over $10 billion in assets.

Another surefire way to ensure you get a Penn reel made in the USA is by looking for some of the models that we mention in this guide. Those are guaranteed ways that you can buy American-made from Penn. You can buy American-made Penn reels as well by buying through independent dealers that carry their fishing reels made in the USA. Penn says the following dealers carry many models of Penn Reels, including:

Penn has also said they are doing everything possible to bring manufacturing back to the United States, but the current climate has made it difficult. Many times, a higher-priced product made in the USA will get passed on to the majority of customers.

Which Penn Reels Are Made in the USA?

All of this leads up to the next question, “What reels does Penn still make in the USA?” You will find how they make the following reels in the United States:

All of the reels mentioned above were produced at their factory in Philadelphia. We also have all of the reels on our list of Fishing Reels Made in the USA if you want to see all of our favorite models and brands.

Perhaps one of the most popular American-made fishing reels from Penn, you can buy their fishing reels in three models in the USA. This series uses both imported and domestic parts. They made it as a big-game saltwater fishing reel intended to take on the big fish.

Here is another one of the American-made series from Penn. They made this reel with global and domestic parts. The International series earned a reputation for its strength, and most people in the market regard them as some of the best big-game conventional reels that you can find.

The Penn Z series are great spinning reels that come with a full metal body and a simple design. They work well for surf anglers because they can hold up to the abuse, and you can clean them well. With all saltwater reels used on the ocean, you want to clean them afterward because how saltwater is corrosive.

Designed for heavy-duty fishing, the Penn Torque II can be done from either the boat or shore. They use a combination of domestic and international parts to make their reels, but they were manufactured in Philadelphia, Pennsylvania. Delivering saltwater toughness, the larger reels in this series have a maximum drag rating of 65 pounds. Some people have said that this reel reminds them of the beloved SS series. This goes back a while, but in 2006, America Sports Fishing Associated listed them as the Saltwater Reel of the Year.

Are Penn Reels Made in China?

Penn manufactures many of its reels in China under several manufacturers, which makes it difficult to point to a single manufacturing location. Some of the Chinese manufacturers of Penn reels include:

Keep in mind that this highlights the manufacturing under the parent company Pure Fishing as well, so some of these may not produce as much. We believe that most of the manufacturing for Penn reels falls under Shandong Huanqiu Fishing Tackle Industrial Co., Ltd since they appeared to take many shipments from them. However, it is difficult to know sure. They are located in Weihai, Shandong, China.

We think it would be a mistake to say that they produce the same quality as American-made. They don’t behave the same way as American reels. For example, the material feels cheaper with more plastic, and they rust easier than the Penn reels of the past. The older Penn reels had a reputation for lasting a lifetime. You might pay more for them at first, but they last forever.

The other reason for this distinction could come from the fact that Penn produces many of its more top-tier reels in the United States while producing the lower-priced reels in China. You will usually receive better quality as you pay more for a reel.

What Penn Reels Are Made in China?

Some of the reels that you may want to avoid because they produce them in China include:

We highlight these reels to paint a picture of what they make in China, but many of the reels from Penn were made in China. If they seem cheap, they were probably made in China.

Some of the Penn reels were originally made in the USA, but they switched production after 2006. One example of this would be the Penn 209 ms fishing reels.

Why Are a Majority of Fishing Reels Manufactured Outside of the USA?

For that reason, fishing reel companies often source at least some of the parts from abroad to keep the costs lower. Penn Fishing, unfortunately, has caved to this pressure. While they do still make some of their products here, they have over 220 fishing reels, and most of them were manufactured in China. We would say that about 34 of the total 220 were made in the United States. As a general rule of thumb, Penn reels made in the USA usually start at around $250.

Don’t worry because we will cover the ones that they make in the United States soon.

What Are Some American-Made Fishing Reel Brands?

We have covered Penn quite extensively, but we would like to mention some of the fishing reel brands that keep it primarily American-made. We believe that you have some great American companies when it comes to this.

Some of the best examples include:

While some of the companies may use globally sourced parts, we respect this because they have kept the jobs in the USA to the best of their abilities.

Even though most of their reels come from overseas, you can still buy some great American made fishing reels from Penn. You do need to watch what you buy from them, however, because not all of their reels are made in the United States. Penn holds a unique place in the saltwater angling industry because of its 1,400 International Game Fish Association World Records. The reason for this success comes from Penn’s culture of innovation and quality.

If you’re out fishing on the water, the sun glinting off the ocean can be a little too much. To combat that, you might wear a pair of sunglasses. We put together this list of high-quality American made sunglasses here.

Also here is a great promo video from Penn if you want to check it out!

Let us know if you have any further questions about where Penn reels are made in the comments below. Also, feel free to share any other information relevant to this article in the comments!