Having its headquarters in Reno, Nevada, Jason Baker started Green Mountain Grills in 2006. Its grills sit in the coveted ranks of the best and remain attractive to even the more budget-conscious consumers. With that in mind, you may wonder where they make Green Mountain Grills and whether or not they’re American made. 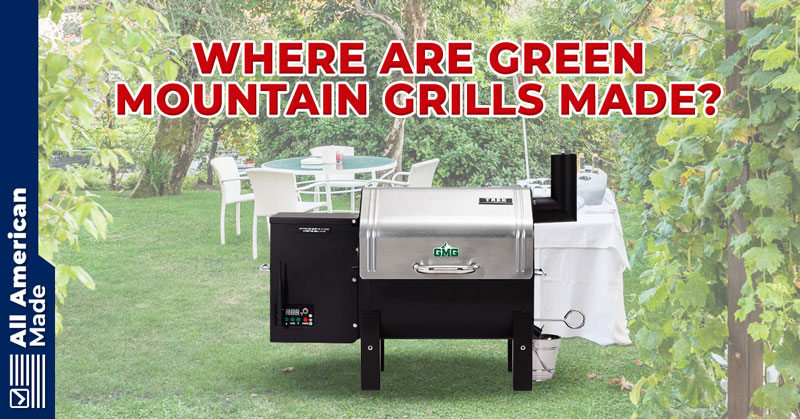 We’ll answer that question below and provide more important details about the company.

This is not surprising, as most grill companies have moved their manufacturing overseas to places like China. Traeger gives you another example of a company that began manufacturing in China in 2006 after the company was sold. Napoleon Grills are also largely made in China. If you’d like a grill that is made in the USA check out our guide here.

The reason that many wood pellet grill companies moved operations over to China and elsewhere came from the prohibitively expensive cost of grills. Wood pellet grills especially have a reputation for being over-the-top expensive, and they cost more than gas grills. This explains why companies often outsource the work to China.

On the lower end, a wood pellet grill will cost a few hundred dollars, but it can go to over $7,000. At times, it can seem comically expensive, and it could even exceed that price if manufacturing was forced into solely being in the United States, unfortunately. 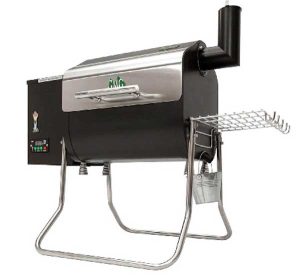 Daniel Boone, Davy Crockett and Jim Bowie—what do these three grills from GMG have in common? All of them were made in China. However, you see the historical American figures, hear of it as an American company and think that they must make their grills in the United States. You would be completely mistaken. Since they started the company in 2006, they have always made their grills in China.

On the other hand, an American company pays taxes to the U.S., which does help our country, but it doesn’t prop us up as much as companies that support manufacturing jobs in the U.S.

We find Green Mountain Grills potentially deceitful—although, we’ll let you decide whether they did this intentionally or not—because it almost looks like they try to fool well-intentioned customers into thinking of their products as American made with a loose association from naming it after historical American figures. There was no reason that they had to name their grills like this other than to potentially mislead consumers.

Why do we find this potentially deceitful? With some things, the average customer expects a certain origin like the American flag or a product named after an American hero. Things like that should be made in the U.S. We feel like this was a deliberate marketing ploy to trick consumers, but we wouldn’t want to say either way. You can learn more about the controversy of the Chinese made American flag here.

The other reason that we believe this is they also cover up the origin of their products in the product information section. Traeger Grills will at least tell you where they produced the product—China. You have to dig deep if you want that same information from Green Mountain Grills.

If you ask, they will tell you that their products were made in China, but they won’t forfeit this information up front, at least in our experience. Even finding the exact origin of their products in China wasn’t an easy task because the information is fairly scarce.

It would be one thing if they were upfront about the origin, but we dislike the smoke screens put in front of the truth. Again, we don’t know if this was done deliberately or not, which is why we remain neutral, but we have seen similar marketing tactics with other companies.

Do Green Mountain Grills Create Jobs in the United States?

The manufacturing jobs from Green Mountain Grills go to the Hubei region of China, but does GMG have jobs for Americans? At their corporate office in Reno, Nevada, they have dozens of American employees. In total, they have 86 employees at the time of writing this, which shows you that this isn’t the largest company out there. The company has many employees in China. They had annual revenue of $14 million. To put this into perspective, Traeger Grills, a much larger company, had annual revenue of $168.9 million.

For that reason, we’d like to cut this company some slack. They’re a smaller company trying to survive in a cutthroat business environment. We do wish they’d stop using historical American heroes as names for their grills when made in China, however, because some people may see that as dishonest marketing. If they’re going to manufacture in China, they should be upfront about it as well if they want people to respect them as a business.

Should You Buy Green Mountain Grills? 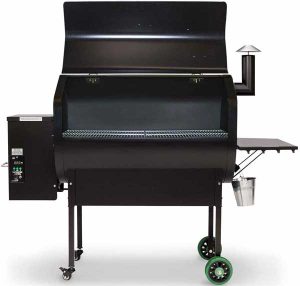 Green Mountain Grills does have a good reputation for making great grills, but because their grills are made in China, we personally would opt for an American brand. In addition, the potentially dishonest marketing tactics that this company uses may leave some customers feeling betrayed when they find out where their grill was truly made. Profiting from potential dishonesty doesn’t deserve support. Decide for yourself if this counts as dishonesty.

With everything said, this is a smaller company, and we can understand why they chose to manufacture in China. Many of the other brands have done the same. It’s the lack of transparency that we dislike. They are fighting in a competitive business environment where pellet grills cost more than the other choices. The brand has to look for ways to save money where they can.

Speaking of the quality, GMG performs well, and they can smoke, grill, or slow cook your food. They have a reputation for ease of assembly. The build quality also felt sturdy to the touch.

On the lower end, the Davy Crockett Grill will cost around $350. The middle range grill, the Daniel Boone Grill costs around $800. The Jim Bowie Grill has an estimated price tag of about $1,000. They also come with a three-year limited warranty where the brand will replace defective grill parts or a defective grill.

Should you patriotically support Green Mountain Grills? You could support them because you personally enjoy their grills, but to be honest, we think you have better choices on the market more deserving of your support that would be far more patriotic.

Let’s have a look at American made grilling companies that have sacrificed and fought to keep manufacturing jobs in America:

As you can see, many of the pellet grilling companies here are smaller like Green Mountain Grills, but the manufacturing supports Americans. The only exception on the list is Weber, which was started in 1893. You can learn more about this great American company here. Another great company that we would love to see supported is MAK Grills because it is not only an American made company—it’s also owned and operated by a veteran husband and his wife.

Some great American made companies in the pellet grilling industry still exist even if that number has dropped in the last couple of decades.

How Much More Expensive are American Made Wood Pellet Grills?

We would like to address the unspoken elephant in the room because we know that you wonder how much an American made pellet grill costs in comparison to one from GMG or Traeger. A Weber wood pellet grill sells for $1,000 on the lower end.

Unfortunately, we found the American made grills had almost zero presence on Amazon with the exception of Weber. We believe this may have to do with the higher cost of buying an American made grill, which makes it harder to compete in that environment. Understandably, not everyone can afford even $1,000 for a wood pellet grill, which is why they may turn to cheaper alternatives.

If you want an American made pellet grill, we salute you for going the extra mile to support American industry.

Popular Related Article: What Pellet Grills are Made in the USA?

What Lower Cost Grilling Company Would We Recommend?

Let’s say that you want a wood pellet grill at a more affordable cost. In that case, you may have no choice but to buy a grill made in China. What company would we say is worth supporting? For people looking for a budget-friendly alternative to American made, we would recommend either Grilla Grills or Traeger.

Here’s why: Grilla Grills and Traeger both manufactured in the United States before they sent those jobs abroad. However, when they moved their manufacturing overseas, it allowed the brands to grow their companies, and they brought back more jobs to the U.S. by hiring more Americans for designing and marketing materials.

Grilla Grills has an extra advantage in that you support a smaller family-owned business. The other reason that we would choose Grilla Grills over Traeger is because of how they still make their extra hardware and accessories in Holland, Michigan. Traeger is a big multi-million dollar corporation, and you will find this brand easy to find if you want it because it’s more ubiquitous than any of the other companies listed.

On the lower end, a portable Traeger pellet grill sells for around $420. That’s a steep $580 discount in comparison to some of the other brand choices that are American made, which is why some people may go for the cheaper options.

We think Green Mountain Grills has a good reputation and overall creates great grills, but we prefer American-made products. We personally really like brands like Smokin’ Brothers or MAK GRILLS.

For a less expensive Chinese made pellet grill, if we were to compare Green Mountain Grills and Traeger, we see Traeger as the clear winner due to having a larger grilling space and ease of shopping online. With Green Mountain Grills, you often need to visit an authorized dealer if you want the best number of choices and we don’t find that beneficial to consumers.

If you’d like to learn more about Green Mountain Grills, you can check out their original promo video below:

2 thoughts on “Where Are Green Mountain Grills Made? 2022 Update”