Whirlpool stands out as one of the leading manufacturers of household appliances. They sell products under other name brands like Maytag, Amana, KitchenAid, Jenn-Air, and Consul. A distinctly American brand founded in 1911 in Benton Harbor, Michigan, the company has always set new milestones for the industry. With all of that in mind, you may wonder where they make Whirlpool. 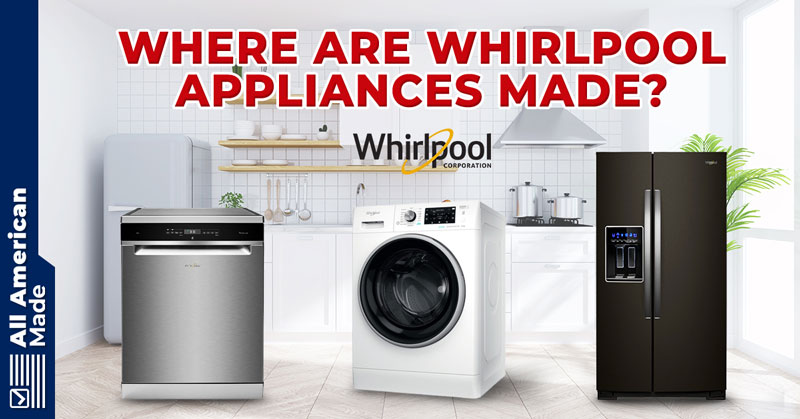 If you’d like to learn more about where they make Whirlpool products and their American roots, keep reading because we will definitely get into more detail about them.

Over 80 percent of Whirlpool appliances are made in the USA. The Whirlpool company has nine manufacturing facilities in the United States and over 70 manufacturing and technology research centers worldwide.

Its manufacturing facilities in the USA include:

How Many People Does Whirlpool Employ?

For the year 2020, Whirlpool reported having employed approximately 78,000 people out of which 27 percent are employed in North America. Here’s Whirlpool’s sustainability report for 2020, in case you want to dig into some numbers and statistics.

Now that you’ve learned a little bit more about their business, you may find yourself wondering who is behind Whirlpool. Whirlpool is owned by Whirlpool Corporation, which means no other company owns them.

As a public company, Whirlpool Corporation’s shares are traded freely; and that means that we get to know exactly who is behind them. Here’s a chart with the top 5 Whirlpool Corp shareholders and mutual funds to date:

If you’d like to go into a little more detail about Whirlpool’s ownership, here’s a CNN Business article listing Whirlpool Corp’s top ten stockholders and more.

Whirlpool makes its products. They do not hire a subcontractor to make their products. In fact, Whirlpool Corporation has several other subsidiaries that fall under its control, such as:

In total, they hold 11 major brand names as subsidiaries. The home appliance company belongs to the Fortune 500 company list, and they see an average revenue of $21 billion every year.

Related Article: What Appliances Are Made in America?

People choose the Whirlpool brand because a well-maintained Whirlpool will last between 14 years and 17 years. An LG fridge, in comparison, will only last 13 years, and Samsung fridges last ten years on average. Keep in mind that this also depends on how well you maintain your fridge, but Whirlpool has superior materials and is made better than the other home appliance brands.

Because they come with a “Made in USA” sticker, you can spot the American-made appliances easily. It becomes a selling point for companies that proudly hold their American roots. If you’re on the lookout to buy an American-made whirlpool home appliance, check for the sticker, it’s your best bet!

Many of the Whirlpool home appliances made in the USA facilities will have at least some of the gaskets and other components that they manufactured in Middlefield, Ohio.

We would advise that you exercise caution when buying online because they don’t tend to label it as openly. That’s not to say that you shouldn’t buy appliances online, but you may want to speak with someone from their online customer service before purchasing to make certain that you buy American-made.

In stores like Home Depot, they make a point to openly label this information to ensure that you know you’re buying American-made appliances.

What Solely American-Made Whirlpool Appliances Can You Buy in the USA?

Here’s a fun fact for you that may send you looking for Whirlpool’s Ohio-built home appliances. Consumer Reports issued a survey of over 50 consumer appliances, and those built-in Ohio were regarded as some of the best and most reliable. Some of the Whirlpool products that did well from Ohio included:

For the clothes washers, the company manufactures Amana, Whirlpool, and Maytag in Clyde, Ohio. They make Amana dryers in Marion, Ohio. Want a front-loading washer? Both of the Maytag Maxima washers come from Clyde, Ohio.

They make KitchenAid dishwashers in Findlay, Ohio. Meanwhile, the chest and upright freezers from Maytag and Amana come from Ottawa, Ohio. KitchenAid stand mixers come from Greenville, and their ranges are from Cleveland, Tennessee. Again, you can easily find the ones made in the USA because they will proudly have the label. Americans want American-made products when possible.

According to the New York Times, an estimated 80 percent of Whirlpool’s home appliances come from their factories in the United States. In an age where many corporate giants have moved their operations elsewhere, we would call this a fair amount of manufacturing that takes place in the United States from this 101-year-old company with a deep American heritage.

The biggest sign comes from the fact that it costs less than the American-made Whirlpools. We would, however, exercise caution if you believe that you have a good deal. The biggest issue with the products made in other countries is that they may not have the same strict standards as what the USA upholds.

More Americans have become conscious of the “Made in USA” label, and they are often willing to pay more for it because it supports our nation. We make good products that have durability in comparison to elsewhere. If the price seems suspiciously low, check the packaging before you buy or request an American-made Whirlpool.

In most cases, this shouldn’t be a problem since Whirlpool does a good job at remaining American-made.

Where are Whirlpool Products Manufactured?

Some of the places where Whirlpool has manufacturing plants include:

You have an exceptionally even spread as far as where Whirlpool chooses to manufacture its products. They place factories in an even fashion without heavily focusing on a single country. This makes sense because of the issues we’ve been seeing with the global supply chain.

We see that they have the heaviest focus in Italy and India. Whirlpool remains one of the top employers in Italy, and they’re the largest producer of home appliances in Italy. While we don’t know how popular they are in Italy, we do know that Whirlpool in India holds a 25 percent share of the market. That should highlight to you one of the reasons that they established four factories in India.

Should You Buy the Whirlpool Brand? 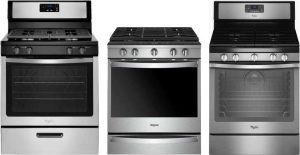 We would say that this would be a fine brand if you were to buy from them since 80 percent of their products in the USA were made there. They create such a large number of jobs in America, which they estimate at around 28,000 total. Around 15,000 can be found in the manufacturing of Whirlpool products.

They do have plenty of manufacturing facilities elsewhere, but you can find plenty of American-made products from them.

One of the curious things comes from how they chose five manufacturing facilities in Ohio. This choice may be because the state of Ohio has more policies favorable to manufacturing, which is why they also tend to have automobile companies manufacturing here as well.

Want to see more about how Whirlpool appliances are made? Check out the video below to get a glimpse of the behind-the-scenes Factory tour.

Is Whirlpool Made in China?

Whirlpool has six manufacturing plants in Asia, six in Latin America, 11 in Europe and the Middle East, nine in the USA, and three in Mexico.

In the past, other companies would manufacture home appliances in China, which hurt American-made brands like Whirlpool. At the start of 2017, the USA began to impose heavier tariffs on Chinese-made goods, making this practice less profitable.

To put this into perspective, Samsung now pays 52 percent, and LG products face a 32 percent duty. Both of these companies were manufactured heavily in China and South Korea. We must protect the companies that bring jobs to America.

Is Whirlpool Made in India?

Closing of Factories in the United States: A Problem?

On the whole, we would say that Whirlpool has done a good job at keeping its jobs in the United States. However, that doesn’t mean that the company hasn’t closed down manufacturing plants. Particularly during the Great Recession in 2008, Whirlpool shut down three of its manufacturing plants in the USA. They closed one in La Vergne, Tennessee; Jackson, Tennessee; and Oxford, Mississippi. Whirlpool also closed its plant in Reynosa, Mexico, in 2008.

While they closed these factories down, they announced the building of a new factory distribution center in 2020 in Tulsa, Oklahoma. This shows you that the brand remains committed to keeping jobs in America.

Whirlpool remains an uncommon corporation in that it largely remains American made, especially with the products that it sells in the U.S. An estimated 80 percent of its home appliances come from the United States. Not only do they have factories in the USA, but they have continued to build new ones up until now. We would still advise watching the packaging, but you can find American made products from the Whirlpool brand.

9 thoughts on “Where Are Whirlpool Appliances Made? 2022 Overview”