Formed in 1937 under the name George Shoe Manufacturing Company, Georgia Boots has enjoyed consistent success. The brand was initially based in Atlanta, Georgia, and has gone on to build a global reputation as an affordable labor footwear manufacturer. 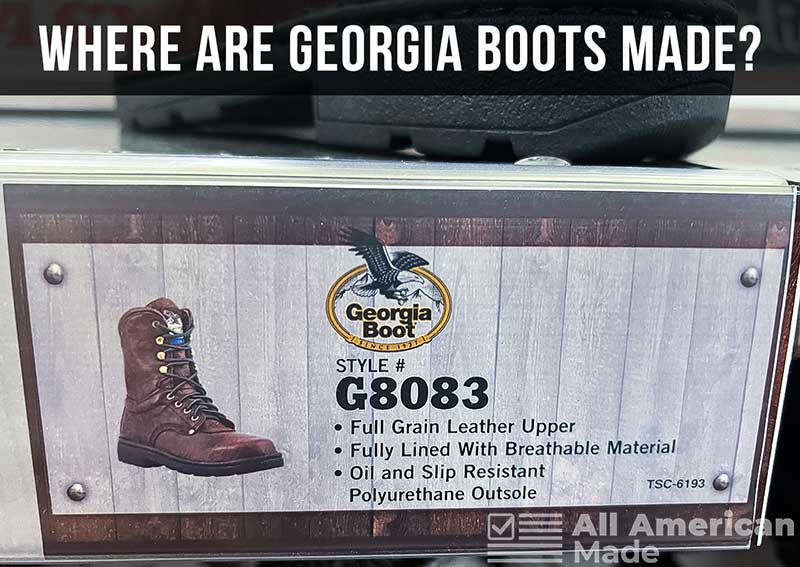 With a long history rooted in the USA, many people are curious about the current manufacturing process of Georgia Boots and where they make their footwear.

Georgia Boots are made in Mexico, China, Puerto Rico, the Dominican Republic, and Asia. Georgia Boots were once produced in the USA, but this is no longer the case.

It is unclear when exactly they made the decision to outsource the manufacturing of their products overseas, but it is a familiar story of a brand that made their name through the hard work and expertise of American workers, then chose to maximize profits by utilizing the cheap labor of other countries.

Despite this, Georgia Boots are still popular amongst Americans, and compared to other affordable brands, their boots are pretty quality.

Which Georgia Boots are Made in the USA? 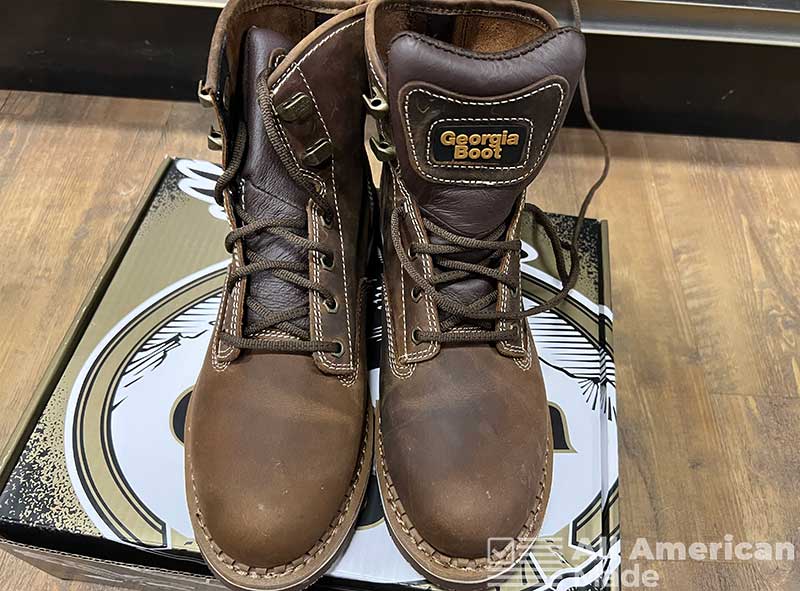 Although the company is based in Nelsonville, Ohio, Georgia Boots doesn’t manufacture any of its footwear in the USA. The brand also has offices in Franklin, Tennessee, and in Alpharetta, Georgia, close to where it was founded over 80 years ago. It’s worth mentioning that the parent company of Georgia Boots, Rocky Brands, also owns Servus, which manufactures a selection of protective footwear in the USA at affordable prices.

It’s a shame that no Georgia Boots are manufactured in the USA, especially considering the company’s history in the country. Despite this, they continue to be popular amongst Americans who need decent quality footwear for work.

Where are Georgia Boots Manufactured?

It isn’t clearly stated where Georgia Boots are manufactured on the company’s website, so we decided to ask them directly. They answer by stating that they make their boots in different locations around the globe, as you can see in the email below.

Rocky Brands, which is the owner of Georgia Boots, among many other companies, outsources the manufacturing of the brand’s footwear overseas to various locations. Doing so will allow them to produce the boots for as little cost as possible to maximize their profits.

Like so many companies that began in the USA, Georgia Boots have succumbed to the temptation to abandon its roots and completely shift its manufacturing process to other parts of the world. This is a shame, but it may have been a necessary economic move for the brand.

Rocky Brands do produce various other footwear brands that feature boots that are made in the USA, which we will cover in detail later in this guide. Unfortunately, Georgia Boots isn’t one of them, despite the brand’s log and decorated history, which began all those decades ago in Atlanta.

Are Georgia Boots Made in China? 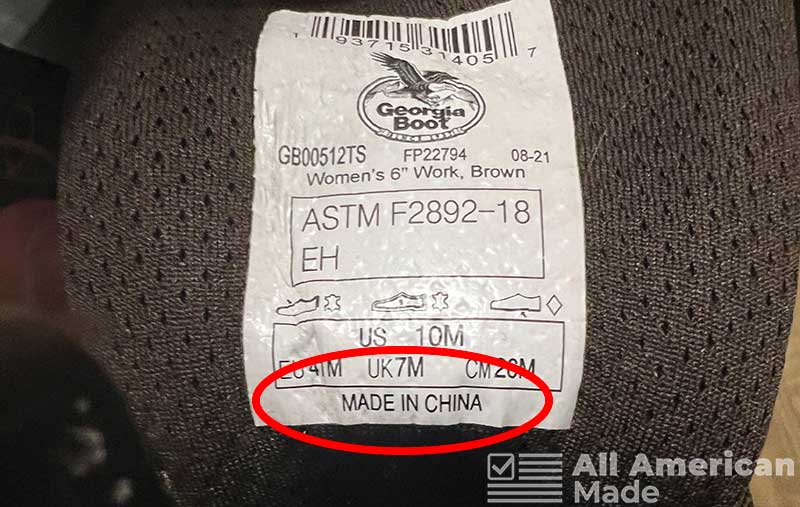 Yes, some Georgia Boots are made in China. On their website, they state that they manufacture some of their products in “Asia,” but they haven’t specified whether this is in China or other Asian countries. There is no information available on their website which specifies the exact locations in Asia where they manufacture their boots.

The parent company of Georgia Boots is Rocky Brands, which was formed in 1932 by two brothers, William Brooks who was later joined by his brother, F.M Brooks. Originally, Rocky Brands started as the Wm. Brooks Shoe Company was headquartered in Nelsonville, Ohio.

In 1959, the Brooks brothers sold their family business, and it was relocated to Lancaster, Ohio. John W. Brooks, who was the son of F.M Brooks, remained with the company as an employee. 16 years later, he required the business that his father and uncle had established and moved its headquarters back to its original home of Nelsonville.

Rocky Brands has achieved its fair share of success since the company’s humble beginnings in the 1930s. It employs over 300 American workers in the state of Ohio and around 2,000 people across other parts of the world. The current owners of the company are Mike Brooks and his four siblings, who are the grandchildren of original owner F.M Brooks. The fact that the business has stayed with this American family despite at one point being sold makes for an inspiring story.

Rocky owns a wide range of companies, but it has always focused predominantly on producing durable footwear and equipment for American men and women who perform physical labor. Georgia Boots is the longest-standing of these companies, being formed five years after Rocky Brands originated.

Then there’s Durango, which is another boot manufacturer that focuses on Western designs, in line with its heritage. Durango is also headquartered in Nelsonville, Ohio, and like Georgia Boots, they manufacture all of their products overseas, with many made in China.

However, not all of the companies that Rocky Brands owns have moved their manufacturing to foreign countries. Servus Boots is a popular producer of protective footwear designed for people who work in potentially dangerous conditions. One of their PVC boot lines is manufactured in the USA, while their more affordable footwear is made globally.

Some other notable companies that come under the Rocky Brands umbrella include Leigh Outfitters, which boasts over 90 years of history and produces a wide range of safety footwear, XTRATUF – a popular footwear brand amongst the fishing community of Alaska, and MUCK, which specializes in boots for gardening and farming. Unfortunately, none of these companies offer boots that are exclusively made in the USA.

On the one hand, it’s difficult not to respect the family-based business that owns Georgia Boots. They’ve provided work for hundreds of Americans over the years and have given back to the community where they are based. Nevertheless, it’s clear to see that manufacturing their products in the USA is not a top priority, but they do explain that this decision has been made mainly out of financial necessity, as you can see in this statement they made in 2021.

Where Do Georgia Boots Materials Come From?

It is unclear whether the majority of the manufacturing takes place in Puerto Rico, Asia, Mexico, or the Dominican Republic, but it is clear that none of the production takes place on American soil. When asked directly whether any Georgia Boots were made in the USA, the brand replied by stating that they are “made globally” to find “the best materials from around the world.” You can see their full response below.

Georgia Boots are undeniably popular and have a reputation for being well built, considering their affordability. If you’re looking for boots that have been made using materials sourced in the USA, then this is not the brand for you. They’ve made it pretty clear that they only use materials from overseas when constructing their footwear.

Have Georgia Boots Ever Been Made in the USA?

It is unclear when exactly Georgia Boots shifted their production to overseas countries, but they certainly began by manufacturing all of their footwear in the USA. What we do know is that Rocky Boots acquired EJ Footwear in 2004, and this included the purchase of Georgia Boots, among other brands. From this date on, no Georgia Boots have been manufactured in the USA, as Rocky Boots has preferred to use the cheaper labor of foreign countries for the vast majority of its products.

Do We Recommend Georgia Boots? 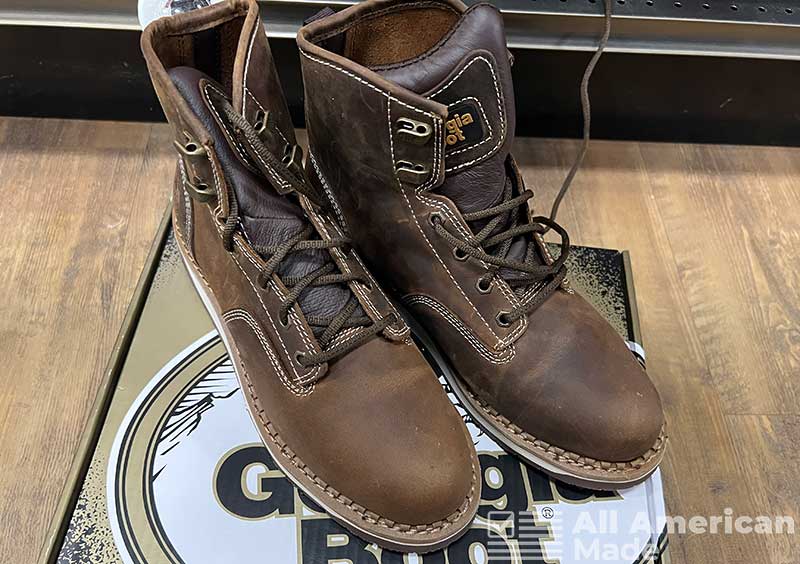 Georgia Boots is, on the one hand, an American success story. With over 80 years in the footwear industry, it has done remarkably well to survive and remain popular for so long. However, we simply can’t recommend these boots based on the fact that they are manufactured entirely in places like Asia, Mexico, Puerto Rico, and the Dominican Republic. This is unfortunate because Georgia Boots is a brand that many Americans trust, and they do produce some decent boots.

Rocky Brands, which owns Georgia Boots, also owns a wide range of other companies, of which hardly any produce American-made products. While this may be due to financial reasons, we can’t recommend them as they have abandoned their American roots. There are, however, plenty of wonderful American-made work boots to choose from.

After reading this guide, you should have a better understanding of Georgia Boots and how the business operates. If you’re looking for American-made footwear, Georgia Boots is not the right option for you. They’re an affordable brand that has a rich history in the USA but has now opted to shift its manufacturing process to other parts of the globe to save on costs. If you have any questions or comments, leave them below, and the All America Made team will get back to you as soon as possible.