Viking has certainly earned a reputation for producing professional-grade ranges and cookware. They were also once well-known for making American-made products, but with their large growth over the years, many consumers wonder where Viking cookware is made nowadays. 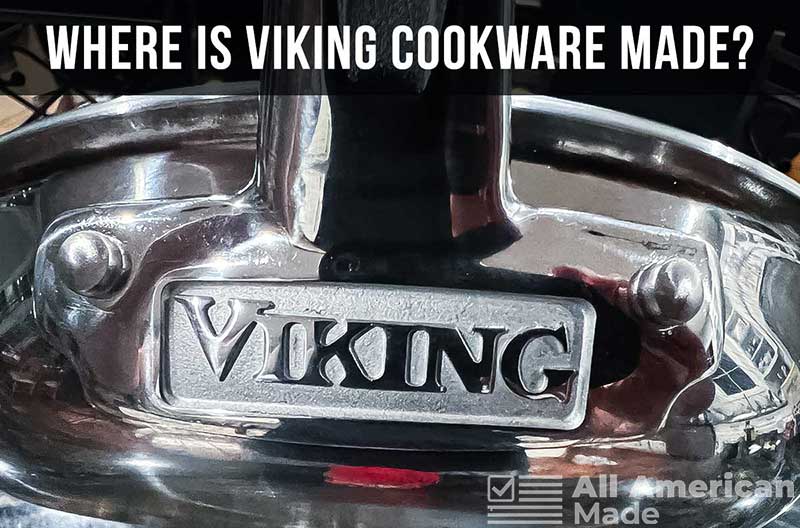 Below, we’ll share exactly where it is made and other important information about the Viking cookware company.

What Viking Cookware Products are American Made?

Some of the cookware that Viking makes in the USA includes:

Still, we can think of other great options when it comes to American-made cookware, and you may want to have a look around before you make a decision.

Viking Cookware: Made in Greenwood

All of Viking’s American-made products come from Greenwood, Mississippi. When the brand started in 1984, it began in Greenwood. Viking has four factories here. The company has become the largest employer in Greenwood, and they employ over 1,000 people. In a small town of 15,000 people, over six percent of the population works for Viking.

The original Viking manufacturing facility in Greenwood covered 35,000 square feet. They built it in the 1950s, and it served as a distribution center for another company before. In 1992, after new products and increased volume, Fred Carl Jr. moved operations to a 100,000-square-foot facility. They kept expanding the facility until it boasted a size of 240,000 square feet.

Rapid growth at Viking continued, and in 1997, they signed a contract to build a second facility to keep up with production demands. This construction began as a 90,000-square-foot facility, and it sat outside the limits of western Greenwood.

Viking bought a third 143,000-square-foot facility in 2000, which served as a refrigeration products plant. It sits next to their cookware facility. They completed the last facility in 2006, which totaled 87,000 square feet.

Looking at the total square footage of all their facilities in Greenwood, they cover over 500,000 square feet. We continue to see investments at the manufacturing plants in Greenwood. For example, in March 2022, Kevin Brown, the President of Viking, says that the plants in Greenwood will install lasers.

They employ a strategy of Kaizen. Kaizen is a Japanese philosophy to continually improve the process. The company seeks out weaknesses and gaps and improves its process. The culture in Greenwood makes up the culture of the plants.

What Viking Cookware is Made in China? 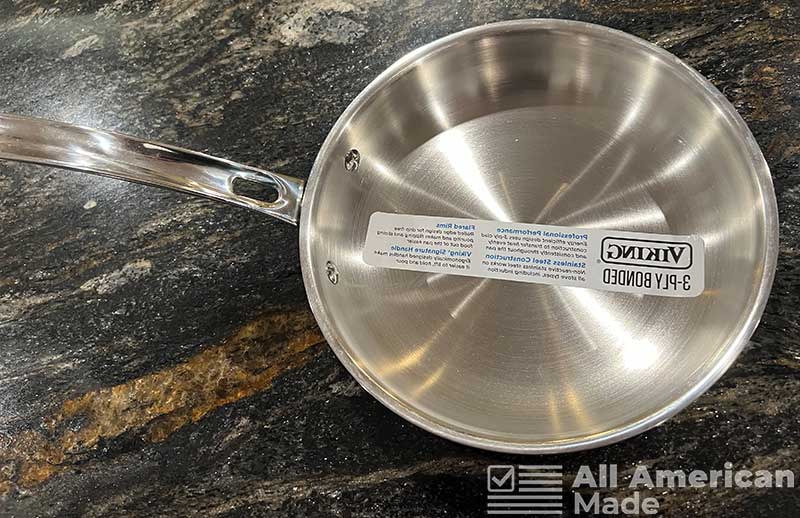 If you speak with a representative, however, they will tell you about how the 3-ply cookware was made in China, which we did in the email we sent below: 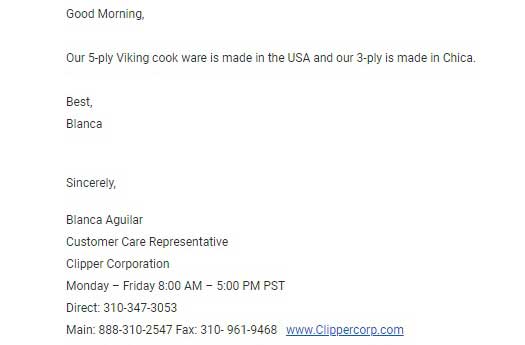 China lacks a reputation for good or even safe products, which is what concerns so many, along with the lack of jobs going to the United States. Some of the products that they make in China include:

You have plenty of Viking cookware that comes out of China, and we can think of more than this, but this gives you an idea. It’s hard to compare the 3-ply cookware versus the 5-ply because they didn’t make this information easy to find. We believe that more comes out of China than the USA, which also appears to be the general consensus.

What we dislike about this brand comes from the fact that even the cookware made in China costs a pretty penny. It was meant to compete as a cheaper alternative to All-Clad, but most cookware from All-Clad is almost fully American-made.

Granted, Chinese-made Viking cookware costs about half of what an American-made piece of cookware costs, but it still costs more than average for cookware. Many people, especially because it comes out of China, won’t want to pay the extra for a product made in China. How many people would want to pay $150 for a piece of cookware knowing that it comes out of China? They might as well have supported an American-made brand for the same price.

You can still do good with Viking cookware, but you need to avoid the 3-ply cookware and seek out the 5-ply if you want cookware made in the USA from Viking.

Is Viking Cookware Made in Belgium?

Where is Viking 3-Ply Cookware Made? 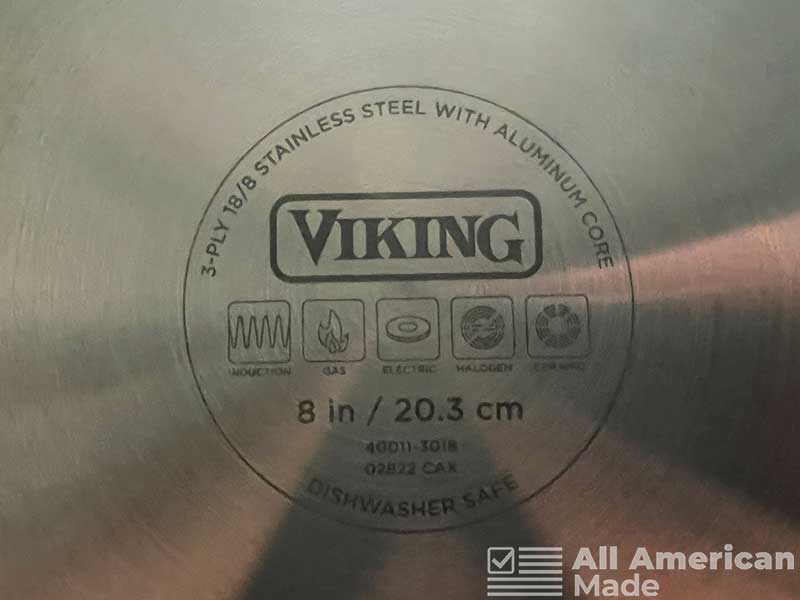 Today, all Viking 3-ply cookware is made in China. In the past, they made it in the USA, but they slowly began to send the work overseas until they no longer made any of the 3-ply cookware in the United States. We can also confirm this based on what the representative said about it being made in China.

Is Viking Stainless Steel Cookware Made in the USA?

Is Viking a Good Brand for Cookware?

Viking is a good cookware company. They compete well with All-Clad, but they remain weaker in the American-made category than All-Clad because that brand continues to produce a larger percentage of its cookware in the United States. Viking does produce some of its products in the USA, but they have an increasing number that comes from China

Unfortunately, Viking doesn’t have a massive reputation in the cookware space. They have more credibility as a producer of ranges and ovens. Especially when you look at the higher cost, there are plenty of options that might be better depending on what type of American-made cookware you’re looking for.

On March 15, 2014, Clipper Corporation announced that they would become the sole manufacturer of Viking cookware. Clipper owns the rights to distribute and manufacture the cookware, but they don’t technically own the company.

While Clipper Corporation owns the rights to the Viking cookware products, Middleby Corporation acquired the Viking Range Corporation in 2013 for $380 million. Viking has a much greater reputation for its ranges and ovens, which may explain why they chose to send the cookware work to China for a large part of the manufacturing.

Once the bigger company Middleby Corporation acquired Viking in 2013, they laid off an estimated one-fifth of the employees. This means that an estimated 20 percent of the Viking employees in the United States lost their jobs. We assume this happened because they wanted to lower their costs with overseas manufacturing in countries with cheap labor like China.

Middleby Corporation has a proven track record of acquiring companies and growing them. When Middleby acquired Viking, they planned to use patents and technologies that they had with the Viking products, and we saw that help the brand to grow. Middleby is a publicly traded company that has its headquarters in Ohio.

What we do like about Middleby Corporation is that they expressed a willingness to keep the existing manufacturing plants in Mississippi. We like that they didn’t just buy it and immediately send the jobs overseas like you sometimes see with other companies.

Overall, Viking does have a few American-made products that we highlighted above. You will want to avoid the 3-ply cookware altogether since it was made in China, but the 5-ply cookware is still produced in the USA. We like that Middleby Corporation has also committed to keeping the jobs in Mississippi. Especially for a publicly traded company, we find that admirable.

Viking overall has a good reputation in the kitchen industry, making them stand out as one of the best in the business, but someone who wants American-made products will have to think carefully about it.