An American automobile legacy that began in 1900, Dodge was founded by two brothers who had close ties with the car industry. Unlike some of the other great American car brands, Dodge was acquired relatively early on by Chrysler in 1928, where they have remained until today. 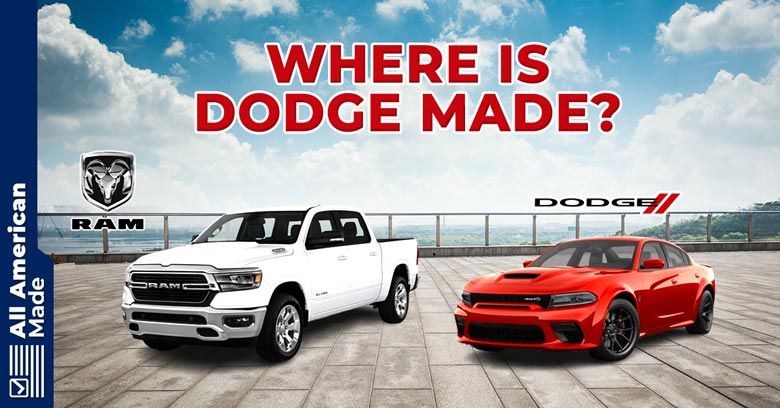 Being an American company, you may wonder where Dodge vehicles are made. We’ll answer that below and are other important information about the company.

Which Dodge Vehicles are American Made?

Before you purchase a Dodge vehicle, we recommend checking the VIN to see what country it was made in. However, some of the cars that Dodge commonly makes in the United States include:

Overall, Dodge performs well at making their cars in the United States.

Keep in mind that we mean assembly when we talk about manufacturing, but this is widespread throughout the auto industry. You can’t find many companies that produce everything in the United States. For that reason, you have to give some leniency.

How to Tell Where They Produced Your Dodge

By understanding the VIN on your vehicle, you can learn where they produced your Dodge vehicle. At the start of 1954, the National Highway Safety Administration began to require automakers to use a standardized VIN system. You can usually find the VIN in the following locations:

Now that you know where to look for a VIN, let’s have a look at the VIN code and what it means since it can help you to pinpoint the origin of your Dodge vehicle:

Look at the first digit to determine where they made the vehicle, and if you want an American-made vehicle, you want to look for a 1, 4, or 5. One of the great things about the auto industry is that they can’t legally mislead you. They must show the information in the VIN, and if you know what to look for, you can guarantee American-made every time.

Dodge is owned by Stellantis and has been since 2021 when Fiat Chrysler merged with French PSA Group. Stellantis is the fourth-largest automaker based on volume and s has 14 brands underneath it.

On January 21, 2014, when Fiat S.p.A. first took over Chrysler, they acquired Dodge as one of the subsidiaries under the Chrysler label. Fiat bought all the remaining shares of Chrysler for $3.65 billion and Dodge fell under that label as well when they merged Chrysler with Fiat. Technically, Dodge has had multiple owners over the years, from 1998 to 2009, as a result of being under Chrysler. The Chrysler brand struggled immensely in the Financial Crisis of 2008 and nearly went bankrupt.

How Many Jobs Does Dodge Give to Americans?

We’d love to give a straightforward answer, but the biggest issue is how Dodge falls under the Stellantis umbrella, the fourth-largest automaker in 2022. That means that you have many famous subsidiaries under Stellantis—14 in total. You will soon notice how many of the Dodge vehicles made at US manufacturing facilities will be made at factories that also make Chrysler and Jeep models.

If we had to estimate how many people Stellantis hires in the US, we would say that they hire around 25,945 American workers. This covers all of the Stellantis facilities, but it doesn’t always mean that they make Dodges there. However, when you buy an American-made Dodge or any vehicle under Stellantis, it supports those workers. Overall, we would say that Dodge does a decent job at keeping it made in the USA, even if they produce some of the cars and trucks in Mexico and Canada.

Where is the Dodge Promaster Made?

The Saltillo Van Assembly Plant, located in Saltillo, Mexico, produces all the Dodge RAM Promaster Trucks. They build it right alongside the RAM pickup trucks like the 2500, 3500, 4500, and 5500 built for the global markets. It should come as no surprise that Saltillo, Mexico, sits just three hours and 36 minutes from Laredo, Texas.

However, all of the RAM 2500 and 3500 heavy-duty trucks come from the facility in Saltillo, Mexico. You know where this market for manufacturing goes because of how out of the hundreds of configurations and several models produced in Saltillo, they only sell the 2022 RAM 2500 Limited, 2022 RAM 2500 SLT, and the 2022 RAM 4000 Chassis Cab to the Mexican markets. You can bet that most of the other models go to the United States.

Here is a video showing Ram 1500 trucks being made in Michigan.

Where is the Dodge Journey Made?

The Toluca Assembly Plant in Toluca, Mexico, produces the Dodge Journey. However, they only plan to sell this vehicle model to the Mexican and Chinese markets, so you will never see those models in the United States unless they bring them up from Mexico.

Where is Dodge Durango Made?

They produce both the Dodge Challenger and the Dodge Charger at the facility in Brampton, Ontario, Canada. Along with those two Dodge models, they make the award-winning Chrysler 300 at this facility as well. This is a 2,950,000 square foot facility that they first built in 1961. It sits close to other Stellantis facilities and may eventually be converted into a plant for making batteries for Dodge because of that fact.

Related Article: Where is Tesla Made?

What Does Dodge Not Make in the United States?

If we had to advise on what you wouldn’t want to buy from Dodge, we would say to avoid the following vehicles since they make them either in Canada or Mexico:

We would especially recommend caution with the RAM trucks since many of those trucks come from Mexico.

Is Dodge Made in China?

We would say that, by and large, Dodge doesn’t make most of its vehicles in China, but the Dodge Grand Caravan was made in Fuzhou, China. The Dodge Journey was also sometimes made in China, but they intended this model more for the Chinese and Mexican automobile markets. You won’t see it sold in the United States. Dodge only has two models that we know of that they produce in China.

Where are the Dodge Hellcat and the Dodge Demon Made?

Where Are Dodge Engine Parts Made?

This is where we see Dodge outsourcing more of the work to China with the engine parts. Under the Mopar Product Line, they serve as an OEM accessory seller for Stellantis. In fact, when you look at the name, it borrows the first two letters of “Motor” and the first three letters of “Parts.” At this facility, they make the auto parts for Dodge, Jeep, Chrysler, and RAM.

That doesn’t mean that they don’t produce anything in the United States, however. For example, they build the 6-liter HEMI engines at the Mack Avenue Engines Complex in Detroit, Michigan. All of the 3.6-liter engines are made at their facility in Ramos Arizpe, Coahuila, Mexico. Most of the transmissions are also made there.

They also have a facility in Germany where they make the 8HP90 transmission for the Hellcat Charger. As one auto mechanic pointed out to us, they produce many of the auto parts in China because it lowers the overall total cost of ownership. If you had the same part made in the USA, it could sometimes cost double or even triple, making it unfeasible to produce in mass quantities in the United States.

Related Article: Where is Chrysler Made?

Dodge, overall, does a fair job at producing its vehicles in the United States. We have seen worse, and even if they only handle the assembly in the United States, it still gives over 25,945 jobs to Americans. We would call that a definite win for America. If you have any questions, let us know in the comments below.